AESTHETIC NOSE SURGERY: WHAT IS IT? AESTHETIC RHINOPLASTY SURGERY 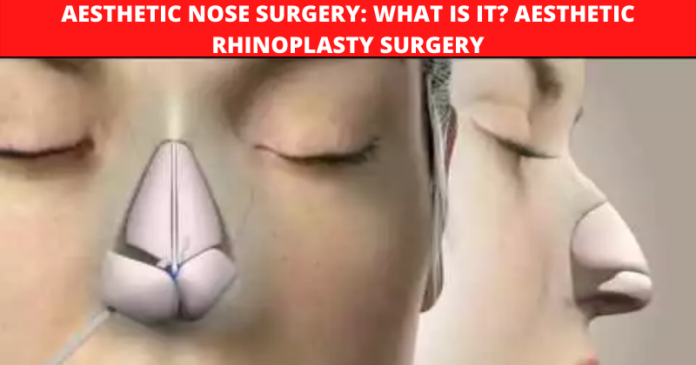 AESTHETIC NOSE SURGERY: WHAT IS IT? AESTHETIC RHINOPLASTY SURGERY

WHAT IS AESTHETIC NOSE SURGERY?

Aesthetic nose surgery actually involves rhinoplasty, which is known to hold the meaning of forming or molding the nose. Here are some facts about the procedure:

Also known as the nose job, this procedure refers to the surgical procedure that alters the nose structure.
The changes done during aesthetic nose surgery can be performed through the removal or addition of a cartilage or a bone. A tissue could also be grafted from another body part or a synthetic material can be implanted to change the nose’s shape.

During the aesthetic nose surgery, light sedation is normally administered first before a local anesthetic is utilized. This causes the complete numbing of the site to be operated upon. This means that it will be insensitive to pain during the surgery. Also read about the alternatives for aesthetic surgery and nose job plastic surgery advantages
A simple aesthetic nose surgery is normally performed on an outpatient basis and could be done in a surgeon’s office or a surgery center. This would only take two hours at most, while complex surgeries may call for a short stay at the hospital.

Risks, Dangers of Aesthetic Rhinoplasty Aesthetic nose surgery, just like any other type of surgery, carries with it certain side effects and risks that you should know about. These include the possibility of an infection or a certain reaction to the anesthetic given.

WHAT ARE THE SIDE EFFECTS OR RISKS OF AESTHETIC NOSE SURGERY?

Here are other side effects to aesthetic nose surgery that you should expect after the operation:

Pain: Aesthetic nose surgery is one of the most painful operations that you could go through, although there are people who are able to cope with the pain well. During nose surgery, the cartilage and the bone are restructured, so it is not surprising that this will cause pain. Pain relievers like analgesics can be taken for this discomfort though.

Bruising: You could expect some bruises to appear around your eyes after an aesthetic nose surgery. Although there might be some that may only have faint bruising, there are others that would get dark marks that often resemble the black eye. There is no need to worry though because bruising is not a sign of a serious complication resulting from your aesthetic nose surgery. These bruises should disappear within ten days after your nose job.

After going through an aesthetic facelift, you must expect your face and head to be loosely bandaged so that swelling and bruising can be minimized. You may also have a drainage tube near your ear to prevent from blood and fluid collection underneath the skin.

You would have to go back to your surgeon after several days to have these bandages and drainage tubes removed. There are other things that you need to do after an aesthetic face lift, and these include the following:

Keeping all your dressings and incisions as dry as you can until you are already advised by your surgeon that you can already take a bath or a shower.

You should also rest and sleep with your head elevated at least for several days, as this could help lessen the swelling.
You may not be allowed to use a blow dryer or wear earrings for some time after an aesthetic face lift.
After a few days or weeks, depending on the procedure performed, you might be allowed to do some mild stretching and walking already. However, you should refrain from doing heavy housework, sexual activity, and vigorous exercise for at least a couple of weeks more.

Smoking and anti-inflammatory medications should be avoided for two weeks more after the surgery.
You should also avoid sauna, alcoholic beverages, and steam rooms for at least a few months.

HOW MUCH DOES AN AESTHETIC FACE LIFT COST?

Depending on the procedure involved in an aesthetic face lift, you could expect to pay as low as $6,000 to as much as $25,000. This would cover the fees of the surgeon and the anesthesiologist as well as the charges of the hospital and its staff.

There are alternatives to an aesthetic facelift though that are minimally invasive and will not need the aid of a scalpel to be performed. These include the laser face lift, Thermage, microcurrent face lift, and the use of natural facelift creams.

Remember that while patients might feel fine right after an aesthetic nose surgery, most centers will not permit you to drive yourself home after the procedure. You will be given aftercare instructions which include how you should go about eating, hygiene, exercise and follow-up visits.

WHAT DO I DO AFTER AESTHETIC NOSE SURGERY?

HOW TO GET TIGHTER AND FLATTER ABS WITH TUMMY TUCK LIPOSUCTION

DISADVANTAGES OF A CHEEK AUGMENTATION PROCEDURE?

DISADVANTAGES OF A CHEEK AUGMENTATION PROCEDURE? A cheek augmentation procedure may cause one to experience side effects in the...
Read more

No information here can be used as medical advice or used to make healthcare decisions! Please only consult professional physicians for advice.