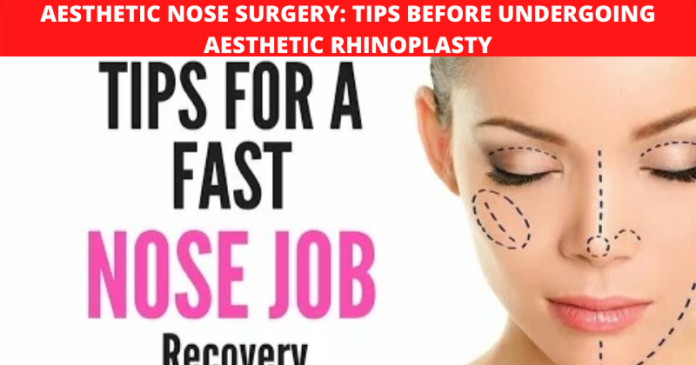 During the initial consultation for aesthetic nose surgery, the surgeon and the patient will usually ascertain the changes that need to be done on the nose. There will be photograph taking and discussions on the techniques, the anesthesia options, and the expected results.
You will also need to undergo several tests before your aesthetic nose surgery. These would include chest X-ray and blood tests. The tests are intended to check blood cell levels that could be indicative of infections or such problems as anemia. Also read how to prepare for facial surgery
Fourteen days before the schedule of your aesthetic nose surgery, you need to avoid aspirin or medications containing this drug. This is because these medications might hinder the blood clotting process, which might result in bleeding problems.
If you are a smoker, then you should cease from smoking by at least 2 weeks prior your aesthetic nose surgery. You should refrain from smoking again until after two weeks after the operation. This is because smoking could slow down the healing process.

How Do I Prepare for Aesthetic Reconstructive Surgery?

The initial preparations needed to be done for aesthetic reconstructive surgery includes the assessment of the patient’s body. This is essential to ascertain which parts are to be involved in the procedure.

If you are to go through an aesthetic reconstructive surgery and there is a need to be placed under general anesthesia, then there are tests that should be done first. These include blood exams to test for blood clotting disorders or other problems like anemia.

A physical examination as well as the taking down of your medical history would also be part of the process before your aesthetic reconstructive surgery. Looking into your medications will also be done to make sure that there won’t be an interaction with the anesthesia.

Here are other preparatory steps that need to be taken before an aesthetic reconstructive surgery:

However, going for an aesthetic nose surgery is a decision that should not be made easily. Careful consideration should be done on various matters that concern this procedure.

HOW TO GET TIGHTER AND FLATTER ABS WITH TUMMY TUCK LIPOSUCTION

DISADVANTAGES OF A CHEEK AUGMENTATION PROCEDURE?

DISADVANTAGES OF A CHEEK AUGMENTATION PROCEDURE? A cheek augmentation procedure may cause one to experience side effects in the...
Read more

No information here can be used as medical advice or used to make healthcare decisions! Please only consult professional physicians for advice.